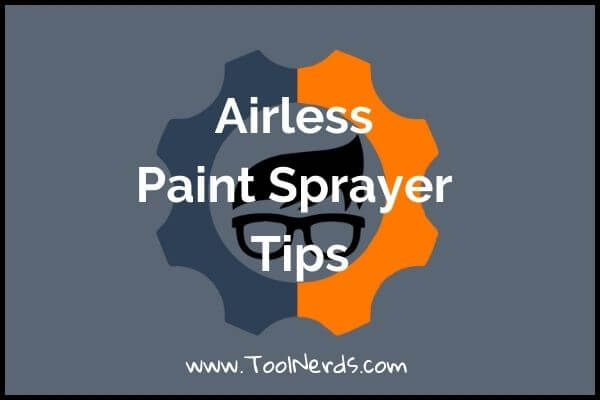 Everything You Need To Know About Airless Paint Sprayer Tips

Airless sprayers are extremely versatile tools that offer fast, efficient paint coverage. They can be fitted with a plethora of airless paint sprayer tips, also known as nozzles, which dispense a wide range of materials.

Spray tips for airless sprayers allow you to control the amount of paint atomized, and the fan pattern width. By choosing the correct tip for the job you’re completing and the coating you’re using, you can cut down on paint waste and better control the spray.

By gaining a solid understanding of how to choose airless paint tips you can get a flawless, professional finish every time. But, how do you know which airless paint sprayer nozzle is right for a large surface, and which is best for detailed, precision work?

Here, I delve into the details of how to identify the different spray tip sizes, explain what they mean, and let you know which coatings they suit best.

There are three numbers stamped on airless sprayer nozzles which denote the width of the fan pattern and the aperture of the tip that the paint atomizes through. Let’s look at which numbers represent which, and how to interpret them.

The first number denotes the fan pattern width the airless tip can achieve when held about 12 inches away from your chosen surface. However, it’s not as straightforward as that — you have to multiply this first digit by two to get the tip’s fan width.
For example:

If you prefer to work in metric, then you can multiply this first number by five to get the fan width. A 515 spray tip will give a fan pattern width of 25 centimeters, for instance.

It’s worth noting that fan widths aren’t written in stone and can vary two inches either way depending on material choice and your airless sprayer’s pressure output.

This first number also indicates the spray fan’s angle when you’re holding the gun perpendicular. This is pretty simple to work out — just add a zero to the number, so if it’s 1, the angle is 10 degrees, 2 is 20 degrees, 5 is 50 degrees, and so on.

The opening in the spray tip is where your paint is atomized into a fine mist and the magic happens. Along with the air pressure, tip aperture controls the amount of material dispensed; the larger the orifice, the more material can pass through.

Aperture is denoted by the last two numbers on the spray tip and is measured in thousandths of an inch.

This airless paint sprayer tip size chart shows you the fan pattern and aperture of some of the most popular nozzles on the market.

This is by no means an exhaustive list of airless sprayer tip sizes, but it should give you an idea of the extensive range on offer.

Now you know how to work out what the numbers mean, let’s take a look at how tip sizes relate to the viscosity of coatings.

Another factor that comes into play when picking the correct airless paint sprayer tip sizes is the thickness or viscosity of the material you’re spraying.

Because there are so many airless tip sizes available, you have a world of choice when it comes to paint thickness. Whether your coating is very thin or heavy and viscous, there’s a nozzle that can deliver.

The range of materials you can spray include:

It’s always a good idea to check the paint manufacturer’s recommendations when choosing your spray tip. Most offer a helpful accurate guide.

Below is a quick reference chart detailing different materials and the range of spray tip sizes that can dispense these. This doesn’t incorporate every type of coating out there, but gives you a good starting guide.

Remember, if you are in doubt check the directions on the paint can.

Choosing the right spray tip for the job can make the difference between resounding success or abject failure. It influences the quality of the finish and the speed of application — and ultimately the cost-effectiveness of your project.

There are three simple factors to consider when choosing the best spray tip for a given job:

Once you find the coating you want to apply, check the manufacturer’s recommended tip size, which is denoted by the last two numbers. Keep in mind, the thinner the coating the smaller the tip’s aperture, and vice versa. If a material is viscous, it will need a larger aperture.

Be mindful of the fact that there could be more than one suitable spray tip size, such as a 215, 315, or 415. The difference is the width of the fan pattern for each, and the thickness of the coat they apply.

After identifying the aperture needed to spray your chosen medium, decide how wide a fan pattern you want. That’s the first number on the tip multiplied by two. For example, a “5” series tip offering a 10-inch fan pattern won’t be good for trims but a “12” series with a 24-inch spray pattern would be great for large areas on new builds.

3. Make Sure Your Airless Sprayer is Compatible

Finally, check that your brand of airless sprayer supports your material and tip choice. While these machines are versatile, some have their limits.

I’ve compiled the following table so you can see at a glance which tips are most popular for common projects.

Each manufacturer of airless paint sprayer will produce a selection of tips for their brand. That being said, there are some generic brands such Pagow or Comidox that are compatible with many major brands.

If you’re more comfortable sticking with original parts, then you can check out the following tips for different brands:

Graco produces a huge range of different tips for its airless sprayers. You can easily identify what tips are best for which materials with Graco’s color-coding system.

You’ll also find that Graco tips are marked with letters as well as numbers. Understanding what the letters, as well as the numbers, mean will help you choose the perfect airless spray tip for your material.

Graco also produces several ranges of tips for your airless sprayer including:

If you’re wondering what the RAC stands for, this indicates Graco’s patented Reverse-A-Clean tips. They allow you to unclog the spray tip by turning it 180 degrees and then continuing with your painting.

Some of the tips you can choose from include:

Graco also offers spray tip guards to help keep your nozzle in place and prevent you from coming into contact with the tip while you’re spraying. There are models for the RAC 5 range and RAC X selection. Some offer a tip extension for airless paint sprayers with 10-inch, 20-inch, or 30-inch poles.

Paint sprayer tips from Graco are durable and last many happy painting hours. Made from high-grade tungsten carbide, these tips resist abrasion and are generally a good investment.

Titan is another major player in the airless paint sprayer field, the company has a plethora of tips to choose from for its spray guns. Within Titan’s reversible tip range, you can choose from standard tips (695 range), high-pressure TR1 tips (696 range), and line striping tips (697 range). Overall, there are more than 100 tips available, starting at 107 right up to 937 — including these in sizes 311 to 517 for Controlmax series machines. Then we have Titan’s patented high-efficiency airless (HEA) spray tips. Utilizing low-pressure technology, these are optimized to spray at a production speed of 1,000 psi, with less overspray and a forgiving feathered edge. The sizes available range from 211 up to 621, offering the ability to spray multiple mediums. This selection of HEA tips is denoted as the 330 series and offers an extended life span and durable construction. They are widely available online, including these options from sizes 330-211 and 330-619. The final tip offering from Titan is the SC-6+ collection. These workhorses are considered by many as the longest-lasting tips in the industry and provide a fan pattern up to 22 percent wider than other tips. You can select from three different ranges, the standard SC-6+ (662), a wide spray SC-6+ (661), or the SC-6+ synergy fine finishing spray tips (667). Across the collection, there are more than 100 tips to choose from, including these Titan 662-313, Titan 661-535, and Titan 671-410 items. Paint sprayer tip guides or guards are also available to help maximize airflow with minimal overspray, such as this TR-1 tip guard.

Wagner’s offers a range of HEA spray tips that provides low overspray from a lower pressure. They offer up to 5 percent less overspray than traditional paint guns and have a soft spray jet for perfect coverage without streaks. Materials they dispense include low-viscosity water-based paints, solvent-based coatings, lacquers, varnishes, and more. Sizes range from a 219 to a 619, such as this Control Pro 311 tip, or a 619, offering a wider spray pattern, or the Spraytech 515. Spray guards are also available for your safety and protection of your spray tip. Generic branded products, such as this extension pole and guard, can also be added if you want. That completes our round-up of the airless paint sprayer tips. Hopefully, you now have a better idea of which tip to use on your airless sprayer. Still have questions? Check out the FAQ below for additional info.

Q: How Often Should I Change My Spray Tip?

A new airless spray tip is good for about 40 to 50 gallons on average. Abrasive particles in paint can distort the shape of the aperture over time, changing it from a long thin oval, to a short round opening. This affects the amount of paint passing through, and the fan pattern.

You can tell if your tip is wearing out if you notice:

Q: What Does an Airless Spray Tip Do?

The spray tip is the part of your airless sprayer where the magic happens — high pressure from the gun’s pump forces the material through the small hole in the spray tip. The result is a fine, atomized paint that can be applied quicker, and with fewer imperfections than using a brush and roller.

Q: How Often Should I Clean My Airless Spray Tip?

Your spray tip should be cleaned after every use and before storing your sprayer. If you fail to clean your tips and gun properly, paint will dry and build up on the nozzle, rendering it useless.

To get the best from a spray tip, I would always recommend using the correct manufacturer’s tip for your brand. That being said, there are some very good generic tips on the market that will fit different brands of sprayers, such as these from Mudder, or from Jebower in a massive range of sizes from 209 to 621.

Q: What is a Suitable Automotive Spray Gun Tip Size?

This depends on the viscosity of the medium you are spraying. Many spray tips for guns used in the automotive industry are measured in mm, so as a general guide:

Q: What is the Best Spray Tip for Doors?

Tips and nozzles are the same things, just two different words. When making a paint sprayer nozzle selection, use the same charts as you would for spray tips.

Elastomeric coatings are heavy and viscous so require larger spray tips to dispense. Look for an aperture of between 0.021 and 0.039 inches.

Q: Is There a Specific Primer Spray Gun Tip Size?

Again, this depends on the thickness of the primer. Follow the manufacturer’s recommendations for the particular primer you’re using.