As one of the most budget-friendly HVLP machines on the market — this sprayer is the consummate tool for paint gun newbies and casual DIYers.

Ideally suited to small-scale projects, this unit arrives complete with three durable copper nozzles — enabling you to choose the ideal cap-end dependent on your spraying medium.

Adjustable flow control allows you to personally tailor the delivery rate, while three spray patterns increase accuracy and reduce the risk of overspray.

Admittedly, it can be a little awkward to clean, and it may lack the robustness for intense use. But, its ergonomic handle, easy-clean feature, and included viscosity cup make it a user-friendly machine for the spray gun novice.

Lacks durability for intense use.

N
Budget appearance may not suit all users.
Check Price at TACKLIFE

Features and Benefits of the Tacklife Sprayer TLPS80A

While at the budget end of the HVLP sprayer spectrum — the TLPS80A is still packed with sufficient features to stimulate the interest of even hardened paint gun enthusiasts.

Here’s what I’m talking about:

While described by the manufacturer as a ‘paint sprayer’ — that’s akin to calling your kitchen oven a zucchini cooker.

The truth is, you will often use your spraying tool for a variety of coating mediums — all of which will have different viscosities (basically, the densities of the liquids).

Hence, if you’re using a highly viscous fluid — such as latex — with too small an outlet hole, you may struggle with coverage. Conversely, a low-density medium — like stains — combined with a large outlet hole will result in a torrent of liquid drenching your working material.

Therefore, it’s reassuring to see that the Tacklife sprayer comes complete with three copper nozzles (1.0, 2.0, and 2.5 mm). Not only allowing you to choose the correct cap-end for your coating material — but also providing a fine finish and durability due to their metal build. Many manufacturers, especially those in the higher-price bracket — often require you to purchase these supplementary nozzles separately.

In addition to the nozzles, this Tacklife sprayer also enables you to control the flow of your covering medium.

No one wants to shoot their entire load after just a few minutes. Hence, this dial feature allows you to personally tailor the emission rate dependent on the viscosity of the liquid and the amount of coverage your working material requires.

The TLPS80A gun from Tacklife gives you the choice of three different spray patterns — adjustable by a substantial finger-operated ‘ear.’

This alters how the paint or stain is applied to your working material — either in a vertical, horizontal, or circular pattern — ensuring you always have the correct method of address.

One of the appealing features of the TLPS80A Tacklife is that it arrives with a couple of accessories — despite being a light-on-the-wallet machine.

Holding the gun in your hand for any length of time will undoubtedly lead to perspiration. This means that your grip begins to become unstable — requiring greater effort to wield the machine, and increasing the likelihood of spraying inaccuracy.

Thankfully, the TLPS80A gun from Tacklife boasts a textured, rubberized handle — increasing traction between the unit and your palm and fingers. This elevates grip, increases comfort, and boosts precision and control.

In 2016, the Tacklife SGP15AC was the original budget HVLP handheld.

Although the paint spraying behemoth Wagner Spraytech was saturating the market with handheld turbines — its basic machines offered disappointingly few features while still being heavy on the wallet for home users.

Tacklife saw an opportunity and delivered the SGP15AC HVLP sprayer — a unit that boasted interchangeable nozzles, numerous accessories, and rapid paint flow — yet at a price point acceptable for casual DIYers.

For almost four years, this creditable sprayer proved popular with homeowners and improvers — until in 2020, Tacklife pulled the machine and replaced it with the TLPS80A.

This new sprayer looks visually similar to the Tacklife SG P15AC tool — featuring all its best characteristics while improving those that were somewhat questionable.

Like its predecessor, the TLP S80A boasts interchangeable nozzles, viscosity cup, cleaning needle, material flow control, and three pattern settings. However, it now boasts copper nozzles — more durable than the original plastic format — and has dropped the easy-fill container mouth, which many owners found to be a pointless inclusion.

As such, the TLP S80A Tacklife can be considered its 2.0 version of its innovative original budget unit.

What Users Say About The Tacklife TLPS80A

In my eyes, the TLPS80A sprayer is an ideal entry-level unit for the paint application newbie.

But, that’s just my opinion.

I once proffered the viewpoint that Luke Skywalker and the whole rebel alliance in Star Wars (1977) were actually anarchist terrorists trying to overthrow a loving and benevolent dictator.

And in truth, Luke, Leia, and Han all deserved to be punished for their criminal activities — including the genocide of thousands of people when they blew up the Death Star. However, after a plethora of rather cruel comments from others on Twitter, it seemed I misjudged the tone of the film.

Hence, so as not to make the same mistake again in this Tacklife TLPS80A review — I searched for other people’s opinions on this paint sprayer — to see what guys actually thought about this machine.

Thankfully, it appears that my tool review capabilities are better than my movie criticism.

The views of owners of the Tacklife matched my own impressions — giving it positive feedback. They welcomed its rubberized handle, praised its low price point, and loved that it included three interchangeable nozzles.

That said, a few DIYers disliked its ‘plastic’ appearance, and some indicated that it may not be sufficiently robust for intense, day-in-day-out work. However, bear in mind that this is a budget unit — and isn’t designed for professional or hardcore spraying applications.

However, all the owners concurred that the Tacklife TLP S80A was an excellent casual use or beginner unit, that offers much more than its price tag suggests.

While the Tacklife is undoubtedly a price-friendly machine — it may be that it’s left you feeling a little underwhelmed. That being the case, don’t despair. Here are a few worthy alternatives that may titillate your spraying desires. 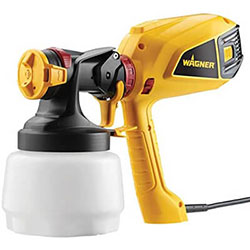 Should you want an HVLP unit, but need a machine that can tackle more heavy-duty projects than the TLPS80A — consider this sprayer.

It boasts a massive 1.5-quart cup — that’s enough capacity to tackle an area of over 125 square feet. Thus making it ideal for expansive jobs such as wall and decking painting and staining.

Check Out the Wagner Control Painter 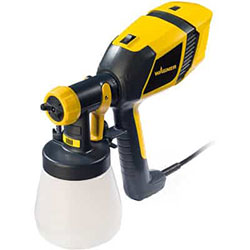 If you’re loving the compact design of the TLPS80A, but find that its four-pound-plus weight is a little hefty — here’s a viable option.

Like the Tacklife, the Wagner 250 is an ideal machine for small-scale projects. However, being a pound lighter — it’s less likely to induce hand fatigue — which may make it appealing to seniors or those lacking in the hand strength department.

Loving the price-point of the Tacklife but still want even more bang for your bucks? This may be the solution.

Like the Tacklife, the Scuddles sprayer is seriously wallet-friendly, but arrives complete with five nozzles (two more than the TLPS80A) and cranks out an impressive 1200-watts of power — compared to the 700-watts of the Tacklife.

CHECK OUT THE SCUDDLES PAINT SPRAYER

The TLPS80A is a perfect budget-friendly sprayer for the novice or casual DIYer who demands a versatile unit.

Ideally suited to small projects, its choice of three spray patterns, adjustable flow control, and three interchangeable nozzles ensure that you can tailor your paint delivery to suit your base material.

Its viscosity cup ensures the optimum level of dilution to prevent overspray or blockage, while its textured handle promises reassuring stability — even with gloved hands.

To be fair, it may lack the robustness to stand up to hardcore DIY or professional applications — and its 1.06-quart capacity makes it unsuitable for larger-scale jobs.

But, for an entry-level machine for intermittent household use — the Tacklife TLPS80A is a creditable sprayer.

Can The TLPS80A Be Used to Paint With Semi Gloss Paint for Window Sills?

Yes. However, due to the viscosity of the medium, I would advise using the 2.5 mm nozzle to ensure adequate paint delivery. If the semi-gloss is particularly dense, it may need thinning with the included viscosity cup.

Can The TLPS80A Tacklife Be Used to Spray Over Head Surfaces?

Yes, this sprayer will work when inverted. However, you do need to take a couple of precautions.

Firstly, ensure that the container is securely attached to the gun to prevent leaks. Secondly, always use eye protection to ensure that no paint spray enters your eyes.

Do I Need to Use a Respirator or Mask When Using the TLPS80A?

Yes. Whenever you use a spray gun — always ensure that you wear a protective mask to prevent stain or paint inhalation.

What’s the Warranty of the Tacklife Paint Sprayer?

The TLPS80A Tacklife comes with a two-year manufacturer’s warranty

How Much Does the Tacklife Paint Sprayer Cost?

Despite incorporating a flow control rate dial, a trio of adjustable nozzles, and a choice of three paint patterns — the TLPS80A from Tacklife is a surprisingly pocket-friendly HVLP spray gun. To check out its current price, take a look at the TLPS80A here.

What Are the Paint Spray Gun Uses of the TLPS80A?

With its choice of three nozzles, you can use the TLPS80A from Tacklife with a variety of mediums, including enamel, varnish, polyurethane, primer, and latex paints.

This allows you to address such projects as:

Yes. Although it’s only really suitable for small rooms. If you have an expansive ceiling, I would consider a unit more suited to larger projects such as the Wagner Control Painter.