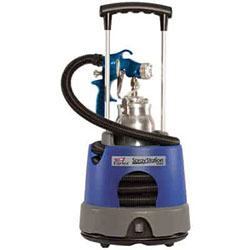 Appealing to tradespersons, contractors, and seriously committed DIYers — the Earlex 5500 addresses large-scale projects such as complete room decorating, outdoor fencing staining, and automotive respraying. Its two-stage floor-standing turbine cranks out an impressive 650 watts of power — delivering rapid coverage and a smooth finish — while a professional-grade lightweight spray gun offers durability combined with accuracy. A 1.05-quart (1000 ml) PTFE-coated (polytetrafluoroethylene, basically Teflon) paint canister mounted on the gun negates the need for paint trays or suction hoses. And, a stainless steel needle and 2.0 mm tip allow for a wide range of spraying mediums — although denser paints such as latex forms may require thinning. This HVLP (high-volume low-pressure) unit offers a choice of three spray patterns — adjusted by a novel ‘Push N Click’ feature. Furthermore, a fluid control dial permits you to alter the volume of your paint or stain delivery. Portability and storage are integral to this machine’s design — with the turbine housing doubling up as a hose, power cable, and gun holder. Furthermore, a substantial high-level carry-handle enables effortless transportation. The HV5500 is one of Earlex’s leading products in its professional paint spraying line — with only the SprayPort 6003 being a higher specced machine. The Earlex brand has been manufacturing paint application tools since 1987 — and, from 2013, has been owned by the spraying behemoth Wagner SprayTech.
Check Price at Amazon


N
Doesn’t include different tips — need to be purchased separately.
N
Cleaning is time-consuming.
N
The hose can be challenging to replace in the turbine storage.
Check Price at Amazon

Features and Benefits of the Earlex Spray Station HV5500 HVLP

The Earlex Spray Station 5500 is described by the manufacturer as a semi-professional machine. Time to examine this unit in detail to see whether it’s worthy of tradesperson status.

A contractor-grade sprayer needs a robust gun that can stand up to extensive use — and that’s what’s included with the Earlex 5500 HVLP. Being stainless steel, this ‘shooter’ offers durability even through hours of painting abuse and will not corrode. PTFE-coated, it’s non-stick — allowing for effortless cleaning and reducing the risk of residual paint making its way onto your final coat. A two-millimeter needle permits the use of a wide range of spraying mediums — although some may still require thinning. Thankfully, the machine comes complete with a viscosity cup to check the density of your paints or stains. Perhaps my only criticism is that this machine isn’t supplied with any smaller tips — that would be ideal for stains and sealers. Although, you can purchase them directly from Earlex if you wish.

The floor-standing turbine of the Earlex 5500 HVLP sprayer literally takes the weight off your hands — keeping the gun lightweight by allowing the heavy power unit to sit on the ground. It promises to provide a smoother and speedier coverage than its less powerful competitors — with 650-watts cranking out an impressive 2.2 psi. The turbine casing contains sufficient space to store the gun, hose, and mains lead when not in use or while the machine is being transported. While a welcome feature, bear in mind that relocating the lengthy hose can be challenging — akin to trying to put an irate anaconda into a shoebox.

As a proud professional or dedicated DIYer you want a smooth and even finish. You can’t just drench your base material in a torrent of paint and hope for the best — leave that foolhardiness to the amateurs. Therefore, it’s pleasing to see that the Earlex HV5500 incorporates a volume control adjuster — allowing you to select how much of your coating medium is emitted from the nozzle end. This permits you to tailor the delivery both to your paint or stain density — and the thickness of your new coat. Furthermore, it will reduce overspray, drips, and pooling — ensuring a tradesperson-worthy finish.

The Earlex HV5500 Spray Station features a 5.5-foot mains cord and a mighty 13-foot hose. This provides exceptional freedom — reducing the requirement for frequent relocation of the ground-standing turbine. Furthermore, this permits use for two-story work — without having to precariously carry the ‘engine’ up a ladder. However, there are occasions where you will need to move the base station. Thankfully, the Earlex HVLP Paint Sprayer HV5500 boasts a high-level handle — ensuring that you can effortlessly move the unit without having to bend down.

The paint cup attaches to the spray gun — and, featuring a wide filling hole — it should allow for spill-free decanting. Furthermore, the interior of this container is PTFE-coated — meaning you can enjoy hassle-free cleaning — and lowering the likelihood of previous paints ruining your current coating medium.

A proprietary ‘Push N Click’ system on the nozzle end enables you to effortlessly switch between the three spray patterns without fiddling — saving you precious time on expansive jobs. Providing a choice of vertical, horizontal, or circular delivery — you can tailor the spray pattern from between one-to-twelve inch widths.

What Users Say About The Earlex 5500

I like to think I know my power tools. After years of spraying, drilling, stripping, sawing, and planing — I’m a pretty good judge of quality and practicality. And, on that basis, in my opinion, the Earlex HVLP Turbine 5500 System is an impressive sprayer that should appeal to contractors and hardcore DIY fanatics.

But, as my wife frequently likes to point out — I don’t know everything.

Hence, to appease her, and offer a non-partisan view in this Earlex 5500 review — I scoured the web for genuine user testimonies — to reveal what owners of this machine actually thought.

Overall, the feedback was positive. These dedicated DIYers and tenacious tradespersons lauded its rapid coverage, praised its fluid volume control, and welcomed its generous 13-foot hose.

Ok, there were a few guys who criticized the lack of tip choice or the rather loud noise from the turbine. However, even these negative naysayers couldn’t fault the smooth finish and low-overspray of the Earlex Spray Station 5500.

And, if you want to hear it from the DIY horse’s mouths — take a few minutes to check out the reviews for yourself. 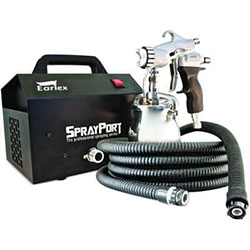 If you appreciate the HV5500 — but want the mother-of-all turbine machines from Earlex — this could be the product you’re looking for. The 6003 is Earlex’s flagship professional-grade sprayer. Cranking out 5.5 psi from its immense 1200 watt turbine (as opposed to 2.2 psi and 650 watts of the HV5500) — it delivers more rapid coverage and greater ability to utilize thicker coating mediums.
CHECK OUT THE EARLEX SPRAY PORT 6003 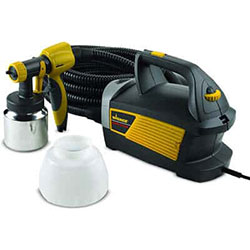 Should you have your heart set on a quality turbine machine — but want something a little less industrial and more DIY-centric than the Earlex HV5500 — I may have found the solution. The Control Spray Max is a prosumer floor-standing turbine sprayer — bridging the gap between general home-improvement and professional-grade units. With a 1.5-quart cup (1419 ml) — it offers a larger capacity than the 5500 and hence will require less frequent refilling.
WAGNER SPRAYTECH 0518080 CONTROL SPRAY MAX

Looking for the ultimate in prosumer rapid coverage? Then you need to forget the turbine of the Earlex HV5500 and go airless instead. The Goplus sprayer knocks out an impressive 0.32 gpm (gallons-per-minute) — and being pump-based — it can draw paint directly from an original container, negating the requirement for cup filling.
CHECK OUT THE GOPLUS AIRLESS PAINT SPRAYER

Whether you’re an extreme DIYer looking to complete expansive projects, or a tradesperson demanding a durable machine that can cope with intense work — the Earlex HV5500 is a solid choice. Its two-stage ground-standing turbine delivers both speedy and consistent coverage while the fluid volume control permits you to tailor the medium delivery dependent on your base material. A lengthy hose and mains lead allow for operational freedom, and its pro-level PTFE-coated metal gun and container promise robustness and longevity. Sure, for the intermittent or novice DIYer this machine would be complete overkill. However, for guys who want affordable artisan-quality results — I’d recommend checking out the Earlex 5500.

The Earlex HV5500 is a semi-professional grade machine that incorporates a floor-standing turbine and metal gun — making it perfect for large jobs. To check out its current price, click here.

No. The 5000 model has been discontinued and replaced by the superior HV5500 model.

Q: What Earlex 5500 Tips Come With the Machine?

The HV5500 comes with a two-millimeter tip and needle. You can purchase additional sizes from the official Earlex website.

With a 650-watt turbine and 1.05-quart container capacity, the HV5500 from Earlex is ideal for spraying large areas such as:

The official Earlex website has a large stock of replacement and upgradeable parts for the HV5500.

Q: Can I Use Sand-Textured Paint in the Earlex HV5500?

No. The manufacturer indicates that this machine isn’t suitable for outdoor textured paints. Using them in the unit may damage the turbine and block the spray gun head.

No. The HV5500 incorporates a turbine, which creates air pressure — in turn, atomizing the paint for spraying.