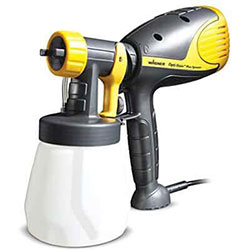 Focusing on wood-based DIY projects such as addressing fencing, decking, and furniture — the Wagner Opti Stain Plus excels with stain, sealer, and polyurethane application.

The Wagner Opti Stain Sprayer boasts a trigger-mounted material flow control dial — permitting you to adjust the volume of medium delivery to suit your current paint type or project. Furthermore, a quick turn of the nozzle allows you to choose between vertical, horizontal, and circular patterns.

Inside a 28-ounce (800 ml) paint cup, the sprayer features a flexible suction tube — theoretically allowing you to spray in any direction with no loss of paint flow. Additionally, a trademarked Lock-N-Go system permits rapid breakdown of the unit for effortless cleaning post-project.

This handheld HVLP unit should suit keen home DIYers who find the majority of their work involves small-to-medium timber applications. Bear in mind that this machine, being unsuitable for latex and acrylic paint use, isn’t ideal for indoor or outdoor wall spraying. Users looking for that capability should seek a more versatile unit, such as the FLEXiO 3000.

The Wagner Opti-Stain Plus sprayer is part of the Control Series range, a line of products that focuses on fine-finish staining on smaller projects. That said, its flagship machine, the mighty Control Spray Max, features an external turbine for larger-scale work — where a precise application is still required.

The manufacturer indicates that the Wagner Opti-Stain sprayer is the consummate unit for thin viscosity spraying.

Time to take a forensic approach and reveal whether the unit has the features to meet these claims.

The Wagner Opti Stain arrives complete with a 28-ounce cup. Being wide-mouthed, filling should be relatively headache-free, reducing the chances of spills and accidents. Furthermore, it surrounds a highly-flexible suction hose. Moving around the cup as you maneuver your hand, it ensures reliable paint pick-up whatever your spraying angle.

However, for a unit that the manufacturer stresses is ideal for fence and decking work — projects that will require a substantial amount of coverage — I’m surprised that the container is limited to 28 ounces. Many of the Control Spray range, such as the Double Duty model, includes a 1.5-quart cup — larger than the Opti Stain’s and more suited to expansive work.

Featured across the Control product line-up, this nozzle has been specifically designed to cope with thin viscosity mediums — thus making it ideal for the sealers, stains, and urethanes concomitant to wood spraying. Providing an orange-peel-free finish and with the minimum of overspray and bounce-back — it will deliver a smooth and pleasingly-even coat.

Admittedly, primers, varnishes, and enamels will require some thinning — which is no great hassle to the knowledgeable DIYer. However, this nozzle doesn’t suit latex paints — unless you want to experience blockages, frustration, some obscene language, and then gun-cleaning to solve your foolhardiness.

To be fair, this isn’t a criticism — the Opti Stain isn’t marketed for latex use projects, such as wall painting. However, it would have been a welcome bonus if Wagner had included an additional iSpray head to deal with more dense paints. Although, this can be purchased separately if required.

The Wagner Stain Sprayer Opti Plus offers three spray patterns — horizontal, vertical, and, circular — adjustable by turning the ‘ears’ on the air cap.

These permit you to tailor your medium delivery dependent upon the demands of your base material. Hence, for up-and-down strokes, utilize the horizontal. For side-to-side movements, switch to the vertical. And when completing detail or corner work — select the circular pattern.

Furthermore, this Wagner paint stain sprayer incorporates a trigger-mounted material flow dial. Adjusting this control allows you to choose the volume of medium directed onto your current project.

It permits you to break the gun down into its constituent components — just by flicking a switch. This is in contrast to many budget-end handheld HVLP units that either require extensive unscrewing or need specialized tools.

This then allows for rapid cleaning — leaving you more time to do something much more worthwhile and constructive — like having a beer.

It’s my opinion that the Wagner Opti Plus is a suitable unit for wood-focused DIYers who tend to deal mainly in thin viscosity mediums.

However, I have been wrong in the past — such as the time when I expressed the opinion that Angelina Jolie was the most beautiful woman in the world, and I ‘definitely would.’ Apparently, according to my wife, I was completely wrong. So wrong in fact, she still reminds me of this on a daily basis.

Hence, not to make the same mistake with the Opti Stain Plus, and give praise where it’s not deserved, I turned to the experts. Thankfully, the best people to ask are the owners of the machine — not my wife.

Hence I delved into customer reviews to discover what users of this unit thought about its practicality in-the-field.

Generally speaking, the feedback was positive and concurred with my own opinions. Guys using the Opti Stain praised the flaw-free performance of the Control Finish nozzle, lauded the ease of cleaning with the Lock-N-Go feature, and welcomed the adjustable paint volume control.

Of course, there were some naysayers.

Overall, however, owners of the Wagner Opti Stain Plus agreed that the unit performed well on small scale wood applications when utilizing thin viscosity mediums.

Should you want to explore further these honest and genuine opinions, take a look for yourself.

What Users Say About The Wagner Opti Stain Plus

Reading Titan ControlMax 1700 reviews gives us a feel for what users think of this paint sprayer. Let’s see what they have to say.

Many Titan 1700 owners love their machines so much, they look for excuses to use it. It seems it’s a breeze for painting a whole house, inside or outside. Then there’s decking, fencing, garages, pergolas, sheds, and much more.

The enclosed instructions are easy to follow so you can be up and running in no time, and cleaning is made easier by the reduced overspray.

It’s not all plain sailing though, and there a few hitches you may come across. Some paints might clog up the nozzle if you don’t pass them through a fine filter first — the unit doesn’t have a filter built in. Also, if you are using thinner paints or stains, you are likely to need to invest in a different spray tip to the one provided.

If you want to investigate the reviews for yourself, just click on the link below. Happy reading!

Alternatives to Wagner Opti Stain Plus

If the above customer Wagner Stain Sprayer reviews and my own thoughts haven’t warmed you to this unit — stick with me.

I’ve sourced some alternative machines that may be more appropriate to your spraying needs and demands.

Should you like the handheld nature of the Opti Stain — but feel it lacks the capacity to cope easily with larger outdoor projects such as fence and decking staining — this unit may appeal.

The Power Stainer Plus is an airless machine — instead of the turbine of the Opti Stain — delivering more rapid coverage. Furthermore, boasting a 32-ounce container compared to the 28-ounce of the Opti — it will not require such frequent refills.

Check Out the Wagner Power Stainer Plus

If you like the compact design of the Opti Stain Plus, yet are disappointed it can’t cope with viscous mediums — I may have found the answer.

The FLEXiO 3000 is a handheld HVLP machine — as is the Opti — but comes with two nozzles. This allows you to complete fine work with a Detail Finish cap-end, yet also importantly, an iSpray head that can deal with dense paints such as latex.

CHECK OUT THE WAGNER FLEXIO 3000

Want to take the weight off your hands? The Neu Master, like the Opti Stain, is turbine-powered — yet houses its motor unit in an external floor-standing casing — reducing fatigue.

Furthermore, this machine arrives with two nozzles — 2.5 and 3.0 mm — meaning it’s compatible with most thin and dense mediums, unlike the Opti, which can only cope with low-viscosity stains and sealers.

If your painting projects mainly deal with wood coverage — the Opti Plus Stain from Wagner is worthy of consideration.

Its Control Finish nozzle is perfect for delivering thin viscosity mediums — providing a flaw-free finish while keeping overspray, bounce-back, and wastage to a minimum. Furthermore, a choice of three spray patterns and variable volume control allows you to adjust your coverage intensity to match your base material.

The proprietary Lock-N-Go feature permits easy dismantling and rapid clean up — while the robust ABS plastic design should provide reassuring durability even after years of hardcore DIY use.

Admittedly, its incapability of dealing with dense latex and chalk-based paints will discourage some users — and the 28-ounce container seems undersized for a machine that’s designed for fence and decking staining.

However, if your work involves smaller wood projects utilizing stain, sealer, and urethane mediums — the Wagner Opti Stain Plus may be worth checking out.

How Much Does the Opti Stain Plus Cost?

Is the Wagner Power Stainer the Same as the Opti Stain Plus?

No. The Power Stainer is an airless handheld machine, whereas the Opti Plus is a turbine-powered Wagner paint and stain sprayer.

What Are the Uses of the Wagner Opti Stain?

Designed to deliver stains, sealers, and urethanes, the Opti Stain Plus is ideal for spraying:

Where Can I Find the Opti Stain Plus Manual?

You can find the user instructions for the Stain Plus Opti on the official Wagner website — or access it rapidly by clicking here.

Can I Attach a Replacement 28-Ounce Cup to the Opti Stain Plus?

Yes. The Wagner Opti Stain is compatible with this container — its part number is #413301.

Can I Paint a Car with the Opti Stain Plus Wagner?

No. This machine is designed for propelling urethanes and stains onto wood. If you are looking for a suitable automotive sprayer, I’d suggest checking out the Wagner Motocoat.